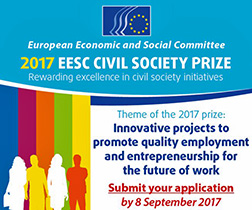 The EESC has launched its 2017 Civil Society Prize. This year, the EESC will reward innovative projects to promote quality employment and entrepreneurship for the future of work undertaken by civil society, focusing on young people, migrants and other people who have difficulty accessing the labour market.

A total of EUR 50.000 will be awarded to a maximum of five winners. The deadline for applications is 8 September 2017 while the award ceremony will take place on 7 December 2017 in Brussels.

The prize will be granted to initiatives already implemented or still ongoing which favour non-discrimination as regards labour market integration. Initiatives must target newcomers such as young people, people with a migrant background or requiring specific support such as the long-term unemployed, women detached from the labour market, people with disabilities or living in poverty.

The Civil Society Prize, now in its ninth year, was launched by the EESC to reward and encourage tangible initiatives and achievements by civil society organisations and/or individuals that have made a significant contribution to promoting the common values that shore up European cohesion and integration.