Since the current refugee situation is getting more and more challenging, some EUNET members agreed in autumn 2015 that there is a need to react quickly and to realize common activities on this issue.
In March 2016, during the EUNET Spring-Meeting in Vienna, the working group was created and a first work program was developed. 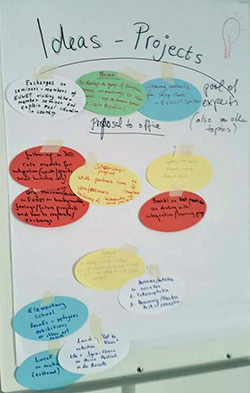 The working group began with a short overview of the current situation of migration in the members respective countries. A common theme found and discussed throughout each was the influx of migrants in each country and their responses – varying from a massive undertaking and introduction of them into the country to total rejection.

Following the debriefing, the group worked together to discuss different materials and projects that can be undertaken. Within the European Union there are various mixed feelings on to how handle the rapid flux of migrants in the region. There has been a rise of radical right wing parties throughout Europe, most with an anti-migrant stance. They reflect and try to manipulate the fear and uncertainties of the population and create an anti-migrant or refugee feel and it is working. The working group attempted to find ideas and solutions to combat this problem.