Introduction
Town twinning represents an original and thick network.  It plays a particular role concerning Europe nowadays and the stakes of European citizenship. 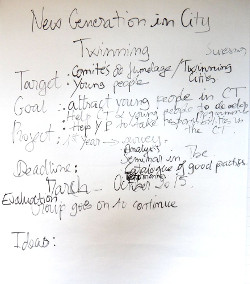 Indeed, town twinning is made of the spontaneous commitment of citizens, in collaboration with their authorities and/or local associations.  This initiative is therefore at the same time a sign and a call for active citizenship.  Furthermore, it encourages the exchanges of experiences on the whole series of questions of common interest, which can lead to find concrete solutions at European level. At least, it offers unique occasions to know the daily life of the citizens in other European countries, to communicate, and to tie links of friendship with them. So, twinning is a real way to improve mutual understanding between the citizens, by favouring the feeling of membership in the European Union and by encouraging citizen’s participation in the European Union.

However, today a majority of town twinning suffers from an ageing picture, with actions that are sometimes not much promoted by the citizens. Founded after World War II, twinning had as first to narrow links between the European nations and to reconcile them.  In the 21st century, the European Union achieved the main mission that it had launched by giving to all European citizens a space of peace and freedom of movement. Town twinning has therefore to redefine and enlarge exchanges to anchor and to develop the feeling of a membership in the same European identity.

Aim of the working group
From now on, the stake for town twinning is to define new innovative forms of actions in terms of education in citizenship and participation, to attract young people and to give them the desire to be actors of European citizenship.

That is why, « la Maison de l’Europe de Toulouse Midi-Pyrénées » is planning a project of reflexion and implementation of actions to favour integration and involvement of young people in twinning exchanges of their cities and thus to sensitise them to European citizenship.

Create a working group with the aim to find new ways to interest young people to City twinning actions, with 3 aims :

First action to launch the Working group
To get into action without delay and to test the validity of such a working group, MDE Toulouse proposed to its partners a project :

In partnership with the members of EUNET and the twinning committees of the region “Midi-Pyrénées”, the Maison de L’Europe de Toulouse Midi-Pyrénées propose a questionnaire to CTc. Answers will permit to measure the involvement of young people in exchanges and their interests. This inquiry allows to think and to take examples of cooperation projects intended for young people. It will also let raising initiatives attractive for young people (sport, culture, mobility, etc.). The materialization of this project will be the organization of a Seminar during two days in Toulouse (12-13/10/15) with the topic: “New Generation in City Twinning”. This seminar will include several workshops such as:

It will also include the participation of the national Agency CIDEM for the programme Europe for Citizens.

The conclusions of this survey and the gathering of good practises will be evaluated in order to measure the need for a working group on this topic.