Warning: Use of undefined constant ĎWP_MEMORY_LIMITí - assumed 'ĎWP_MEMORY_LIMITí' (this will throw an Error in a future version of PHP) in /homepages/3/d24780424/htdocs/EUNET_WP2/wp-config.php on line 16

Warning: Use of undefined constant í256Mí - assumed 'í256Mí' (this will throw an Error in a future version of PHP) in /homepages/3/d24780424/htdocs/EUNET_WP2/wp-config.php on line 16
 EUNET Working Group: Tool-kit on Xenophobia

The working group was terminated in October 2016 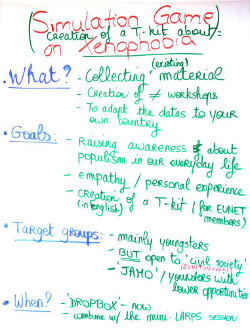 Out of the idea of creating a simulation game on the topic of right wing extremism/ populism the working group developed the idea to create a tool-kit which consists of different modules which can be seen as single modules itself (module 1-4) or can be used as one simulation game (1-4 as introductions and 5-6 for the game).

What to do and when?

Citizenship Education at School in Europe – 2017

EUNET is member of the Lifelong Learning Platform