The European Parliament should have the right to decide where and when it meets, said the Constitutional Affairs Committee. MEPs undertake to initiate an EU treaty revision procedure to propose the changes needed to allow Parliament to decide on the location of its seat and its internal organisation. 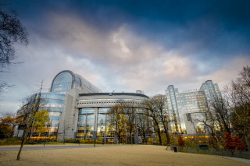 “In times of crisis, it is not credible for the EU to expect only citizens to accept changes and budget cuts. The ‘travelling circus’ arrangements forced upon the European Parliament by EU member states cost huge amounts of money, damage the environment and are disliked by a large majority of EU citizens. Our report shows how Parliament – the only directly elected body representing over 500 million EU citizens – can break free from being taken hostage by the member states and demand the right to decide itself when and where it meets”, added co-rapporteur Gerald Häfner (Greens/EFA, DE)

The report says that additional annual costs resulting from Parliament’s geographic dispersion have been estimated at between €156 million and €204 million, equivalent to approximately 10% of Parliament’s annual budget. The CO2 emissions associated with moving among the three working locations have been estimated at between 11,000 and 19,000 tonnes.

The report is to be put to a vote by Parliament as a whole at the November plenary session.