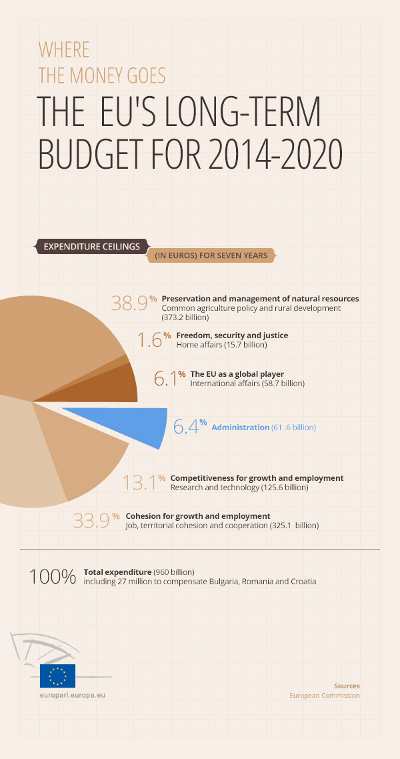 EU’s long-term budget: how it all adds up

Doing more with less: the agreement for the EU’s budget for 2014-2020, which was approved by MEPs on 19 November, will for the first time see funding decline compared to the previous long-term budget. However, this does not mean that the EU will be any less ambitious. In talks with the Council and the Commission EP negotiators have pushed hard to ensure the best use of each available euro. For more about how the money will be invested, check out the infographic.

The Parliament has secured an agreement allowing unused funds to be transferred to the following year or to be reinvested in other parts of the budget. No less than 94% of the EU-budget is re-invested to benefit businesses and people in all member states.

The budget will be reviewed in 2016, giving the next Parliament starting its term in 2014 the opportunity to have its say. Member states also agreed on the setting up of a working group to research how revenue sources could be modernised in order to reduce member states’ contribution to the EU budget.