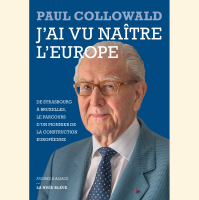 Paul Collowald, who was notably the general manager for information at the European Commission and the director of the cabinet of the President of the European Parliament Pierre Pflimlin, has published “J’ai vu naître l’Europe”, with Nuée Bleue.
This book of interviews with Sophie Allaux-Izoard reviews the life of a pioneer of European integration. Prefaced by Jacques Delors the book recounts the small and great history of Europe as Paul Collowald has experienced it since 1948; it is a story marked by his meeting with Robert Schuman and his Declaration of 9th May 1950, which, for Paul Collowald, became the focus of a study and his passion.

Paul Collowald was guest speaker at our General Assembly 2011 in Metz.