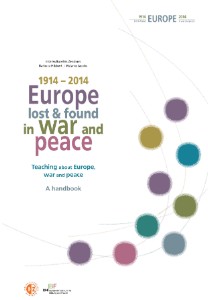 On the occasion of the centennary of the First World War, the Interkulturelles Zentrum initiated and coordinated the international thematic school networking project “1914-2014: Europe lost & found in war and peace“.

One result of this project is an online handbook with 21 methods with teaching suggestions about the topics of Europe, war and peace. The handbook can be downloaded here:

One really interesting method used in the project was the “scripted drama“, which allowed students to experience history through theatre and role play. In this, students both engage with the events of the July Crisis and how they led to the outbreak of the First World War and as well as consider the differences between 1914 and 2014 and the mechanisms that encourage peace in 2014.

The scripted drama provides an independent lesson plan and can be downloaded here:

Scripted drama Europe lost and found in war and peace