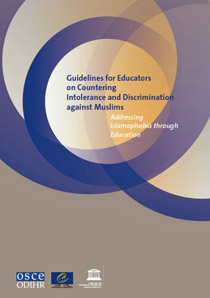 Intolerance and discrimination against Muslims are not new phenomena. However, they have evolved and gained momentum in recent years, particularly under conditions of the Paris attacks, the global economic crisis, anxieties about national identity and difficulties in coping with the increased diversity in many societies. Such developments have contributed to a growth in resentment and fear of Muslims and Islam that often been fuelled by sections of the media and by some political discourse. Muslims are often portrayed as extremists who threaten the security and well-being of others.

These stereotypes have impact not only on young people but also on their parents, as well as on teachers and other education professionals. This presents a new challenge for educators. While teachers cannot be expected to resolve the political and social tensions among communities, they can play a central role in shaping the attitudes and behaviours of young people. The actions and approaches adopted by teachers and school administrators can be crucial in promoting respect for diversity and mutual understanding, both in schools and in society.

Developed by OSCE/ODIHR, the Council of Europe and UNESCO, these Guidelines aim to support educators in countering intolerance and discrimination against Muslims. They are intended for a wide audience, including teachers, principals and head teachers, education policymakers and officials, teacher trainers, teacher unions and professional associations, and NGOs. The Guidelines are relevant for both primary and secondary education and can also be used in non-formal education settings.

Guidelines for Educators on Countering Intolerance and Discrimination against Muslims