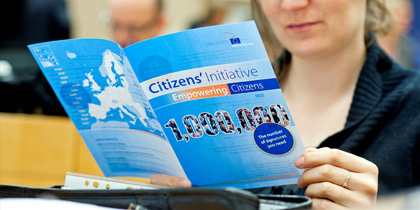 The European citizens’ initiative, foreseen in the Treaty on European Union, allows EU citizens to participate directly in the development of EU policies by calling on the European Commission to make a legislative proposal.

To be considered by the Commission, an initiative must gather the support of at least one million EU citizens from at least seven member states. The Commission is holding an open public consultation on whether or not to make a legislative proposal, and explain the reasons for that choice.

This consultation intends to gather the views of citizens and stakeholders on the current Regulation. It focusses on the shortcomings that have been identified and on options for improving this Regulation.
Target groups are citizens and stakeholders, in particular: organisations such as civil society organisations promoting participatory democracy instruments and public authorities working around the European citizens’ initiative and/or having similar participatory democracy instruments in place.