The latest Erasmus statistics released by the European Commission reveal that nearly 270 000 students – a new record – benefited from EU grants to study or train abroad in 2012-2013.

While studying at another university continues to be the most popular choice, one in five students (55 000) opted for Erasmus job placements in companies.

The three most popular destinations for Erasmus students in 2012-2013 were Spain, Germany and France. Countries sending the highest number of students as a proportion of their graduate population were Luxembourg, Liechtenstein, Finland, Latvia and Spain. 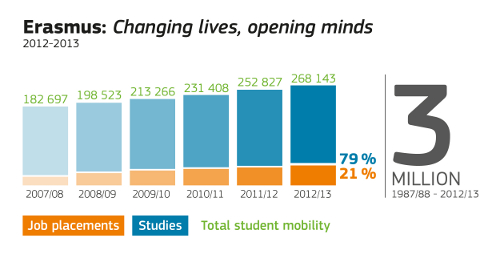