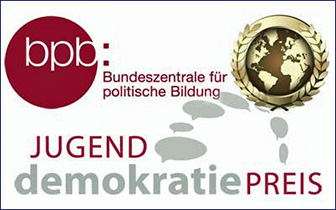 The German Federal Agency for Civic Education/bpb will continue awarding the “Youth Democracy Award” in 2016. This year, the focus is on projects which aim to raise awareness against right wing populism in everyday life.

Applications can be submitted until April 15, 2016.

These days, the democratic system is being challenged in multiple ways: anti-democratic slogans, xenophobia and electoral success of right wing parties have surfaced not only in Germany but in many European countries. This is why the bpb would like to honour a project in 2016, which sends a signal against this rising tendency and demonstrates that respect and tolerance are important values that need to be preserved.

The winners will be selected by a youth jury consisting of 15 students aged 16 to 27 from all over Germany. They will discuss and honour the project which has the most convincing and sustainable impact in regard to the competition theme. Applicants will be informed about the decision in late July 2016.

Please visit this website for further information as well as the application form.

The winner project will be honoured with 3000 Euro.