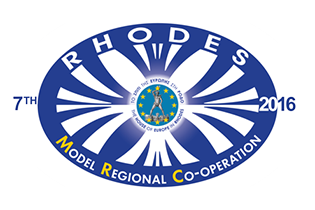 Rhodes Model Regional Co-operation or RhodesMRC is an academic simulation that follows the practice of Model United Nations, but dedicated to regional organizations. The 7th edition of RhodesMRC will take place in Rhodes, Greece, for 5 days, October 12-16, 2016, a unique academic and cultural experience.

Students, young scientists of law, political science or international relations and diplomats or just international relations “fans”, gather together in Rhodes each October to simulate the works of the organs and committees of a regional international organization, gaining valuable experience on negotiations and resolution making. During these simulations, each participant is assigned a country which he/she represents during the sessions. He/she is acting as an official of the assigned country, so he/she is challenged to ignore any personal thoughts and act as a true diplomat.

Being academically innovative and challenging, RhodesMRC is dedicated to Regional Co-operation. During its seven years of run, it has provided the international academic community with unique simulations of the Union for the Mediterranean, the Black Sea Economic Co-operation Organization, the Organization for the Security and Co-operation in Europe, the EuroAtlantic Partnership Council of NATO, the Organization of American States, the African Union, a Middle East Peace Conference and the Council of Europe.

For its academic innovation and unique nature, RhodesMRC has received various recognitions:

During its six editions, more than 680 people from 18 countries have participated to RhodesMRC, contributing to its success, while sharing the experience of diplomatic procedure and unique moments of fun!

Following the unprecedented success and expansion of RhodesMRC 2015, RhodesMRC 2016 has been designed and is being prepared as a huge conference, to be held next October, 12-16, in Rhodes. Our current plans can accommodate up to 280 participants to the University Edition and up to 120 participants to the High School Edition, with back-up plans are already in place to facilitate the participation of even more.

The simulated committees for the University Edition will be:

The simulated committees for the High School Edition will be:

RhodesMRC 2016 is being organized by the House of Europe in Rhodes. The Region of South Aegean, the City of Rhodes, the Dept. of Mediterranean Studies of the University of the Aegean, and the European Network for Education and Training, e.V. – EUNET serve as organizing partners. The International Center for Black Sea Studies, the Center of International and European Studies of Kadir-Has University and the Institute of European Integration and Policy serve as academic partners, while RhodesMRC is strongly affiliated with the Europa.S and the ThessISMUN conferences, the three being the oldest and largest university-level simulation conferences in Greece.

A highly experienced Organizing Committee is in charge of all aspects of running a conference that is held in unique buildings and monuments of Rhodes rich history and cultural heritage. A Scientific Committee of 22 professors, academians and experts from 8 universities from 4 countries are supervising the simulation preparation that will be run by a skilled Board of young scientists, students and professionals.

More information on how to apply, fees e.t.c. are available at www.rhodesmrc.org.